I was born and raised in Southern California. I love the ocean and mountains that surround this area.

I wanted to be a psychologist but decided that I wouldn’t make it if I couldn’t solve people’s problems, and besides it’s hard to spell. So I took the long way around to rediscover my love of all things ART. After taking classes at the local college and trying to decide what to do with my life I took an opportunity to go to Guadalajara, Mexico and spent the following year teaching English. While in Guadalajara I was able to travel by bus to lots of places, one of them being Puerto Vallarta. While visiting there I met an artist who encouraged me to pursue my love of art. When I returned to the U.S. I took printmaking, art, drawing and Spanish classes at the local college.

I returned to Puerto Vallarta and took a job at my friend’s gallery. I started out painting Watercolors with scenes from Vallarta and selling them to the tourists. I graduated to painting on cloth making windsocks with fish on them.

Anyone who bought one of those got a bargain since I was recreating the fish on both sides of the sock! From windsocks I went to painting on t-shirts. I didn’t like the quality so I hired a local woman to sew shirts for me-the popular “blousons”. Returning again to the states I ran into a high school friend of mine who I knew owned a small store. I asked her if she would carry my clothing line and she suggested I participate in the Arts Festival she was promoting in Montrose. That was over 25 years ago and I’m still here. I opened a store in 1988 and continued to sell at the art festivals as well as wholesale and online sales.

In April 2012, I closed my retail store to pursue licensing my designs to manufacturers so I can focus on art and design and not manufacturing.

My loyal customers have been buying and enjoying my art and clothing since 1985. Thanks for supporting me! I appreciate it.

My designs are whimsical, colorful, fun, yet sophisticated. 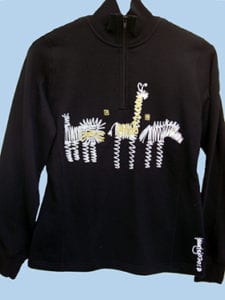